[FIX] ‘CAS System Was Unable to Initialize’ in WOW

Some World of Warcraft players is suddenly unable to start the main game client in order to access the game. This issue is manifested by 2 different error messages: ‘The CAS system was unable to initialize’ and ‘Initialization error: failed to create storage component‘. This problem is not specific to a certain Windows version since it’s reported to occur on Windows 7, Windows 8.1, and Windows 10.

CAS System Unable to Initialize in World of Warcraft

After investigating this issue thoroughly, it turns out that there are several different causes that might produce this problem with Word of Warcraft. Here’s a shortlist of potential culprits that might cause this problem:

Now that you know every potential culprit that might be causing this issue with World of Warcraft, here’s a lost of methods that other affected users have successfully used to fix the problem with their WoW installation:

If you are encountering this issue while attempting to launch World of Warcraft via the Firestorm launcher, it’s likely that this problem is occurring due to some kind of file corruption that is affecting the WOW legion installation.

Several affected users that were previously dealing with the same problem have confirmed that using the Analyse & Repair function inside the FIrestorm launcher finally allowed them to launch World of Warcraft without seeing the same ‘The CAS system was unable to initialize’ error.

If you find yourself in this particular scenario, follow the instructions below to repair World of Warcraft using the Firestorm Launcher:

Note: If you are using Batlle.Net as the default launcher, use the Scan & Repair function instead, by right-clicking on the World of Warcraft icon. 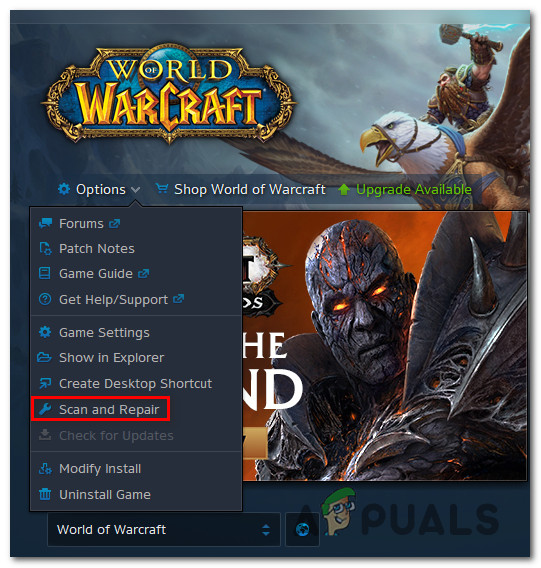 Scan and Repair the World of Warcraft installation

In case you’re still seeing the ‘The CAS system was unable to initialize’ or ‘Initialization error: failed to create storage component‘ error, move down to the next potential fix below.

As it turns out, another potential scenario that might cause this problem is a selection of remnant registry files left behind by an old installation of Word of Warcraft (or the Firestorm launcher) that are conflicting with the current game version.

Several affected users have confirmed that the problem was resolved after they deployed a 3rd party registry scan using the CCleaner utility to remove any unused registry keys and values that might facilitate the conflict.

If you find yourself in a similar scenario where you might see this error occurring due to a Registry conflict, follow the instructions below to clear any unused Registry files from an old WOW / Firestorm installation via CCleaner:

Note: This type of cleanup will ensure that every unused instance of a registry value will be removed. This will serve the purpose of eliminating a conflict between your current WOW installation and any remnant files from an older installation

In case the same problem is still occurring, move down to the next potential fix below.

Method 3: Adding a command-line argument to Battle.Net (if applicable)

As it turns out, this problem might also occur due to a version mismatch. Several affected users facing the same problem have managed to fix this problem by using the Battle.Net launcher to add an additional command-line argument to the Word of Warcraft: Legion game.

Note: This is only reported to be effective in those instances where this problem has occurred with the sub error message ‘Error downloading versions data from patch service: WOWDOWNLOAD_NOT_FOUND.URL.‘

If you haven’t tried this quick fix yet, follow the instructions below to add a command-line argument to the game listing on Battle.Net in order to ensure that the game is able to download the correct version data:

As it turns out, you can expect to see the ‘CAS System Unable to Initialize ClientHandler’ error occurring due to the fact that your system doesn’t have the Windows Secondary Logon service turned on. This service essentially allows administrators to log on with a non-administrator account to perform administrative tasks without having to log off.

If this scenario looks like it could be applicable, follow the instructions below to ensure that the Secondary Logon service is Enabled inside your Services screen:

If you are still unable to launch World of Warcraft and you’re seeing the ‘CAS System Unable to Initialize ClientHandler’ error still occurring, move down to the next method below.

In case you recently downloaded and installed World of Warcraft after having it installed on a different computer, you might see the “The CAS system was unable to initialize: Unable to create storage component” error occurring when you initially try to launch the game.

If this scenario is applicable, you should be able to fix the problem by navigating to the location where you installed the game and deleting the folder the cache folder called indices. There are a lot of affected users confirming that they finally managed to run the game normally after navigating to the game application folder and removing the indices folder.

Here’s a quick step-by-step guide that will walk you through the process of deleting the indices folder of your WOW installation:

Another reason why you might be seeing the ‘CAS System Unable to Initialize ClientHandler’ error appearing is that the local installation of WOW is missing writing permissions. Write permission is required to update, patch and otherwise make changes to game files and folders.

Keep in mind that by default, folders and folders might be locked by default when you copy them from different hard drives or computers or when you install a cumulative Windows Update or you upgrade to Windows 10 from an older Windows version.

If this scenario is applicable in your particular scenario, follow the instructions below to unlock the files and folders related to the WOW installation, giving the necessary writing permissions by disabling Read-Only settings: